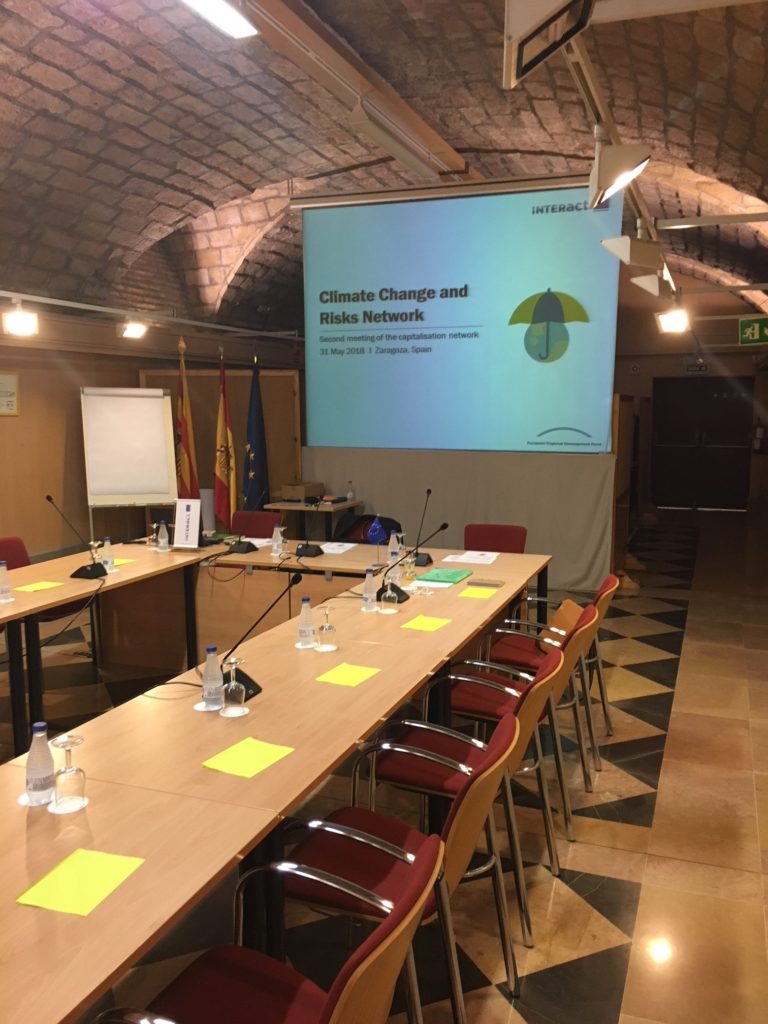 On 31 May – 1 June, I participated in the second Interreg Thematic Network meeting on climate change and risks that took place in Zaragoza, Spain. Climate change is an area of high importance to the North Sea Region programme. With almost 50% of our ongoing projects addressing this topic, we take every opportunity to stay updated in this area and exchange knowledge and experience with other Interreg programmes in this area.

The network meeting was well organised and facilitated by Manuel Gonzalez Evangelista of Interact, who explained the main purpose of this network: ‘The network brings together Interreg practitioners from programme and project level, in order to share good practices and examples of how European cooperation can support the climate change and risk prevention struggle. By fostering this exchange of knowledge and experience, we hope to be able to improve the quality of projects and enhance the visibility of their results. The target group aims to include not only Interreg practitioners, but also other experts from EU Institutions, climate organisations and climate research centres.’

The result orientation of projects and programmes was part of the agenda of this meeting. How can substantial evidence of results be identified and how can we reach a higher visibility of those results?   One upcoming option for ongoing Interreg projects is to join the ‘Interreg Talks: 6 projects, 1 Slam’, organised as part of the European Week of Regions and Cities in October 2018 by Interact and DG Regio of the European Commission. Note: The deadline is one week’s time, so if this is of interest to your project, you must react fast.

The importance of becoming more climate resilient manifested itself clearly in Zaragoza, where the effects of climate change are already felt. In fact, the city had experienced heavy rainfalls in the previous week which had caused many problems and damage. We saw how the river Ebro was still swollen, overflowing its banks. 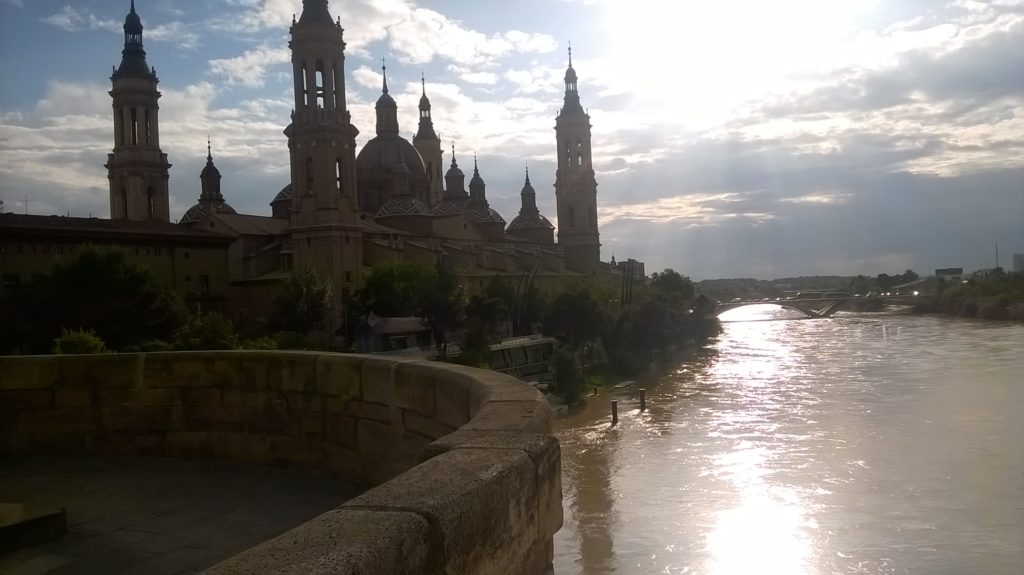 Mr Evangelista: ‘Climate change must be priority number one for our decision-makers because it is increasingly affects citizens’ lives. It is also a global issue that cannot be tackled individually, but must be addressed based on cooperation. Our network offers the possibility to show what Interreg is doing in this specific field, to build on existing results, and to cooperate on sustainable solutions. Many people associate Interreg with small cross-border projects with only local impact. This network can show how Interreg is contributing to the overall goal of tackling climate change in different European territories.’

Policy Officer Dina Silina of the European Commission’s DG Climate Action also highlighted the role of Interreg programmes and projects in the bigger picture of the Commission’s efforts to prevent climate change.

‘At the European level, we are implementing the EU strategy on adaptation to climate change adopted in 2013, which aims to make Europe more climate-resilient. It is a broad and ambitious strategy covering many sectors and areas and is based on a genuine multi-level governance approach. In practice, this means that we work with many different policy areas, such as environment, water, agriculture, regional development and cohesion, energy, disaster risk reduction and others, as well as with all levels of governance, be it EU, national, regional, local and also macro-regional.’

‘Interreg is one of the crucial and unique actors in this diverse landscape of adaptation policy. We at the European level value very much the dialogue and exchange with the Interreg community to receive feedback and exchange on how we can help each other to bring forward the important work of adaptation and make our territories and societies more resilient to the changing climate.’

Ms Silina found the achievements by Interreg ‘impressive’. Referring to a presentation given at the meeting, she stressed that in the period 2007-2013 alone, some 1,470 Interreg projects focused on climate change adaptation, biodiversity and risk management. This corresponds to 15% of all Interreg funded projects in this period.

‘This is a goldmine of information and knowledge on how climate change challenges can be tackled jointly by regions and countries through working on joint climate adaptation strategies, tools and methodologies, early warning systems and so on, to deal with the climate challenges and risks that are going beyond national or regional borders and affecting all the Europe.’

She continued: ‘We also know that the focus on climate change has been further increased in the current programming period 2014-2020, where a political objective was set for the whole EU budget to reach at least 20% climate related expenditure. The European Territorial Cooperation [Interreg] programmes, though  a relatively small instrument of the European Regional and Development Fund, are a very important tool to address these challenges shared between regions and countries.’

The second day included an excursion into the Pyrenees, showcasing the climate challenges facing mountainous areas.  Though starting at 25 degrees Celsius, we had to bring our winter jackets as we were to visit the snowy Portalet mountain pass 1.794 meters above sea level. 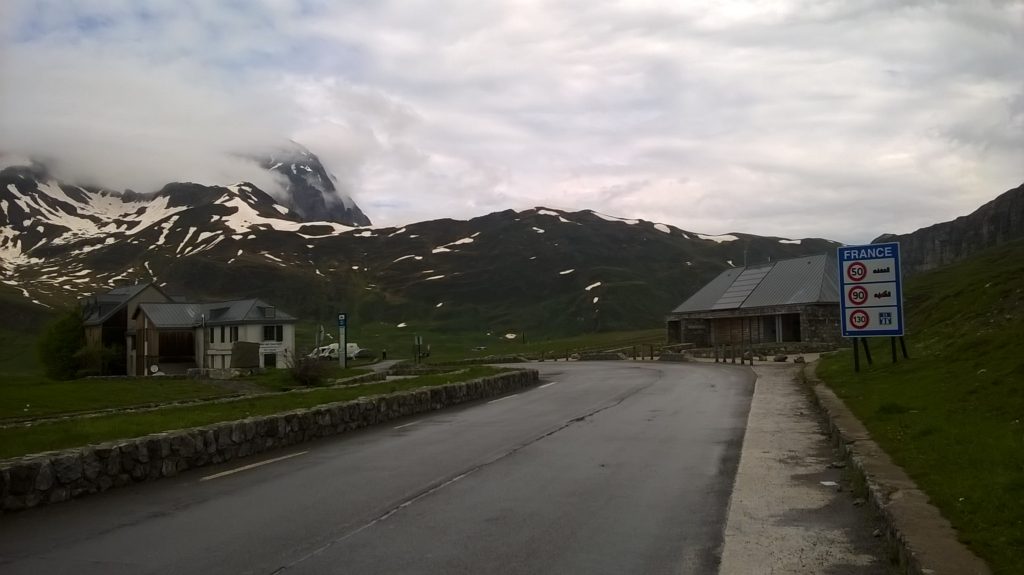 The Pyrenees Climate Change Obervatory (OPCC) and the Spanish-French cross-border project SECURUS were introduced. OPCC is an initiative to assist 7 territories to set up adaptation policies to cope with climate change challenges whereas the SECURUS project is already working with protection and prevention of avalanche, landslide and erosion risks and risks due to electrical storms. 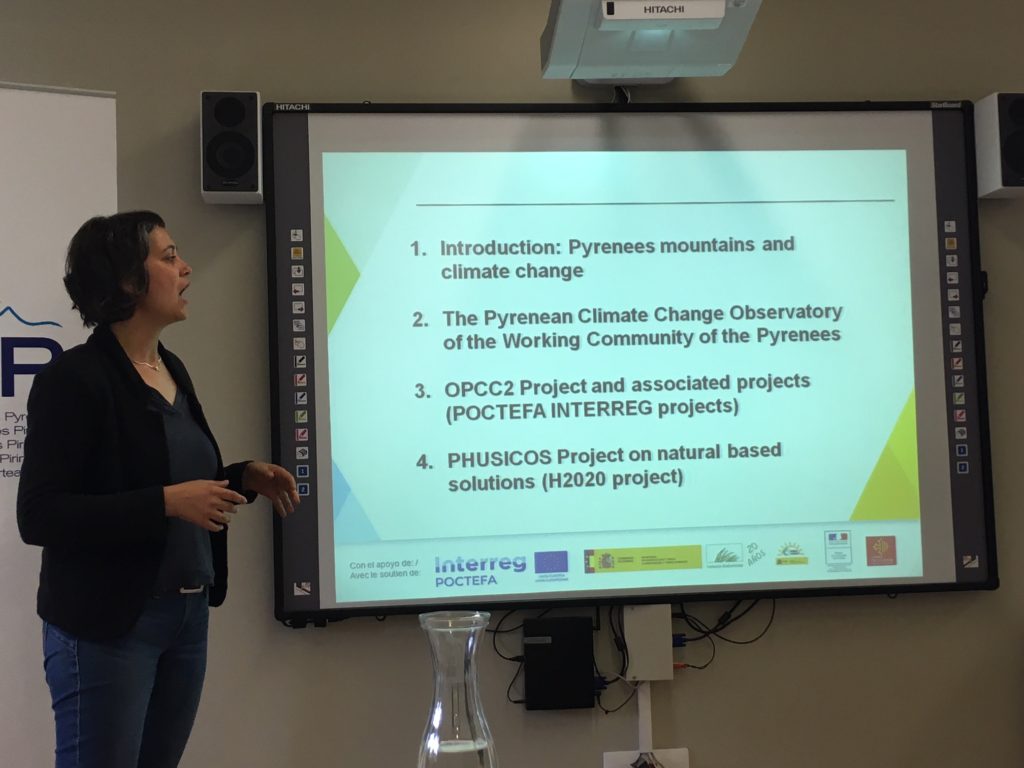 The excursion provided a vivid impression of the challenges faced by mountainous regions. I found the OPCC weather records especially disturbing – the data clearly showed how the effects of climate change are becoming more visible and will affect us all in a more intense way in the years to come.

That is why I asked Ms a Silina about the future of climate change projects, especially with regard to the new Multiannual Financial Framework that was presented by the Commission in May 2018.

‘The new Multiannual Financial Framework for the period 2021-2027 raises the level of ambition for climate mainstreaming across all EU programmes, proposing an increase to at least 25% of EU expenditure contributing to climate objectives’, she explained.

‘This would amount to € 320 billion to be spent on climate change mitigation and adaptation through different EU spending instruments and programmes.  In line with this, the Commission has proposed ambitious climate targets of 30% and 37% for the European Regional Development Fund and the Cohesion Fund, respectively. This will contribute to a greener, carbon-free Europe through green and blue investment, climate adaptation and mitigation. Interreg programmes and projects supported by the European Regional and Development Fund will play a crucial role in this work.’

The meeting was organised and facilitated by Interact. Interact’s mission is to support territorial cooperation programmes in their daily work, helping us to successfully navigate the Interreg world, and providing valuable advice, tools and learning events as well as content related network meetings.