Dream, dare, do. This is part of the magic formula used by the Dutch Province of Fryslân to open doors for novel approaches that turn water problems into assets. Transnational cooperation takes centre stage in Friesland’s water venture.

Water is the hallmark of Friesland. Stretching along the North Sea in Northern Netherlands, this low-lying area is criss-crossed by canals, waterways, and lakes. Water is important in local culture and traditions such as the 11-cities ice skating race.

It seems only logical that the Province of Fryslân is spearheading water innovation that sparks recognition and investments – the cultural and geographic conditions are just right.  And support from Interreg has made it possible to overcome the uncertainties and risks that are inherent in innovation. So say two Frisian experts from the Province’s central administration – Simon Tijsma, Programme Manager of Sustainable Innovations and Albert Ruiter, Interreg Coordinator.

It all began in the late 1990s, in the Environmental and Water Department of Friesland’s main city Leeuwarden.  ‘Some of us who worked there had an idea: Maybe we could do more than deal with issues of filthy urban water to meet the regulations. Perhaps we could even prosper from the omnipresence of water – our most prominent regional quality,’ explains Mr Tijsma.

Initially, this idea did not garner much interest and obtaining funding was difficult. Mr Tijsma: ‘Innovation is about doing things differently: You believe in an idea, you do something to realise it, and then you see how it works. Unfortunately, the world works the other way around: People only believe something once they can see it. This is why it’s hard to sell new ideas.’

‘When we finally obtained a grant from national sources it was only 5,000 euro, which was clearly not enough to realise the idea,’ says Mr Ruiter. At this point, a Dutch member of the North Sea Commission, Hans van Meerendonk, made them aware of the opportunities of Interreg.

‘With his help, we found partner cities facing the same challenges, and the North Sea Region Programme co-financed our first international water project, Water City International. Once the EU funding was in place, we were able to secure more funding from national sources’ , states Mr Ruiter. ‘This was the turning point – we started to build international contacts and above all, it allowed us to provide proofs of concept.’

‘Our core approach was to start from our dreams – each partner city developed their own water vision. Next, we built on existing challenges and opportunities in each city to realise the visions – a bit like composing a meal based on what you have in your refrigerator, rather than starting from a fixed recipe,’ explains Mr Tijsma.

Water City International and its sequel, Water City International II, improved urban water systems and surrounding areas in cities in six countries. One example is the river Potmarge and its surroundings in Leeuwarden. ‘The river was so polluted that people said, “if you jump into the water you will be dissolved before you reach the bottom.” The banks of this river used to be an eerie no-go area that people would avoid,’ explains Mr Tijsma.

Complementing dredging operations, the projects tackled problems of sewage water overflow ending up in the river and explored how urban spatial planning could integrate water to stimulate local development. Local artists, water companies, and tourism organisations worked alongside regional and local authorities. Citizens were involved in the process as well.

As a result, the Potmarge area has developed into a delightful space attracting citizens, tourists, and businesses. New houses have shot up along the riverside, where families go picnicking and kids go playing. An abandoned church is now teeming with start-up companies, the area hosts a water research centre, and the river boasts a floating terrace.  Tourists can even enjoy a boat ride, something that would have been unthinkable prior to the Water City projects.

The Water City projects not only managed to turn wastelands into attractive areas, raising the well-being of the local communities. They also turned polluted water bodies into economic assets for the involved cities. With a total project budget of €10 million, Water City International II generated additional investments of over €50 million across the partner cities already within its lifetime.

More than a decade has passed since this project ended, yet the results keep snowballing. ‘The willingness to invest in water initiatives has soared,’ states Mr Ruiter. ‘In the last ten years, such investments have exceeded 300 million euros in Friesland. This has been achieved by developing a programme on water technology enabling us to attract a lot of financing from national government as well as the EU. The Interreg Water City International projects were a very important catalyst of this capitalisation process.’

Another Interreg project, Mopark, introduced electric boats in the restored inner-city canals, which led to the launch of the 11-cities Solar Boat Race. In turn, this event as well as other water qualities were important elements in Leeuwarden’s successful bid for European Capital of Culture 2018.

Over time, Friesland has led a series of Interreg projects. Today they are working with a broader range of EU programmes and Friesland is increasingly recognised for its sustainability initiatives. Recently, South Korea has shown interest in learning from the Dutch water experience. During the Olympic Games in Pyongyang in February 2018, Mr Tijsma presented Friesland’s proposal for a global competition between islands about inventing new, fun ways to save water and energy.

‘It all started with a grant of 5,000 euros and a small dream,’ observes Mr Tijsma. ‘Our approach to water innovation remains much the same, only our dreams have become bigger. Our current vision is to be an international water innovation hub. We also have more ingredients in our fridge nowadays – and more experienced cooks!’

Since 1999, the Province of Fryslân has been continuously involved in transnational North Sea Region projects. Current projects include BIOCAS, Inno-Quarter and #IWTS2.0. Earlier projects include Cradle to Cradle Islands, Water City International I and II, Mopark, NOLIMP, and Urban Water Cycle. In addition, the Province is increasingly engaged in a broader range of EU programmes.

Are you curious about the full magic formula of the Province of Fryslân? It is DDDOOOTTT: Dream. Dare, Do. Overheid (government). Onderwijs (education and research). Ondernemingen (SMEs). Technology. Talent. Tolerance. 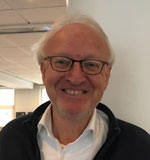 Simon Tijsma is Programme Manager of Sustainable Innovations of the Province of Fryslân. He has been strongly involved in water innovation and international projects for over 20 years. 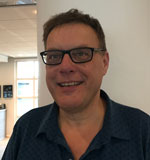 Albert Ruiter is Interreg Coordinator of the Province of Fryslân and has been continuously engaged in Interreg programmes since 2000.