The North Sea Region Programme’s second thematic priority is eco- innovation, which focuses on ‘greening’ the production and consumption of energy in innovative ways.

How can the North Sea Region, which has some of the highest levels of resource consumption and carbon emissions in the world, reduce our use of limited natural resources and stimulate eco-friendly economic growth at the same time? These are the challenges Priority 2 addresses.

Jespr Jönsson is Priority 2 Project Advisor at the Joint Secretariat. Here are his thoughts about the priority and the projects he oversees.

What do you like about being a Priority 2 project advisor?

‘I really believe that eco-innovation is a key area for the EU – and the North Sea Region, in particular it meets the needs of the environment. The concept of eco-innovation is relevant to increasing sustainability in many sectors – for example, urban development, agriculture, technology, water, waste (recycling), construction, transport, air quality, and energy efficiency. Joanna Drake, Deputy Director-General of the European Commission’s Directorate-General for the Environment, has said that…”companies don’t just make business out of the environment: they are key agents of change and enablers of an economy-wide transition.” We welcome companies to collaborate with public authorities, research institutions, and other organisations in this priority.

Something we are really interested in supporting in Priority 2 is initiatives to build the circular economy. The circular economy improves on the old linear economy model by using resources until they can no longer provide value and then recycling and regenerating materials at the end of their life. But we are also keen on any form of action that creates clear progress towards the goal of sustainable development. This can be achieved either by reducing the environmental impact of products or activities or achieving a more efficient and responsible use of resources.

One example of a project that does just this is SCALE-UP, which targets the “cleantech” industry and offers transnational business support services to harness renewable materials and energy sources, reduce the use of natural resources, and cut or eliminate emissions and waste. The partners in this project expect that their work will accelerate the greening of the NSR economy, which will result in a 10% reduction in carbon emissions by mid-2020.’

How do you think the projects in Priority 2 affect the 60 million inhabitants of the North Sea Region?

‘The specific output target for Priority 2 is set at “54 green products, services and processes piloted and/or adopted by the projects,” and we can already see that we will exceed this target significantly. This is positive for the people who live in the North Sea Region because it really raises the bar for the development of new technology and processes affecting behavioural change and improve take-up of energy efficient technologies.

All projects in Priority 2 aim to have impacts in such areas as the development of ports or the level of cooperation between businesses or public organisations, including schools. DUAL PORTS, for example, aims to decarbonise regional ports by renewing use of soil in port development and refuelling a bunkering system using hydrogen. This is a great example of the development and use of new and smart technologies.

2IMPREZS, which is relatively new to my portfolio of projects, aims to foster both behavioural and energy saving measures in schools in the North Sea Region, reducing the schools’ energy consumption and lowering their CO2 emissions. This project’s innovative angle is that it will tackle the whole spectrum of energy efficiency measures in schools: the behavioural, the technical, and the financial, rather than just one of them. Their aim is to reach 30% energy savings in 141 schools throughout the region.

So Priority 2 is about impacts on businesses and sectors, whose changes/improvements impact people further down the line. This is the essence of the circular economy.’

You have attended quite a few project kick-off meetings since last autumn. What is your favorite part of participating in these meetings?

‘I really enjoy meeting the different partners and seeing how they function together in partnerships. I tend to focus on the people coming together rather than the technical stuff, although I do have to explain the rules – it’s part of my job. Each partnership is like a football team – a group made up of some experienced partners and some new ones, who will work together toward a common goal. It’s gratifying to see them start talking and using the terminology and concepts I convey and then translating what they’ve learned and discussed into concrete actions.’

Please describe some of the interesting activities and pilots that Priority 2 projects are carrying out.

‘The 2IMPREZS project plans to involve teachers, students, school management, and others in the creation of joint energy saving programmes through a competition called “energy challenges in schools.” The kick-off for this initiative was held on 26 January of this year, when 500 students from more than 30 different Dutch schools gathered in Groningen. The selected students are ‘energizers’ of their school, which means that they represent their school in the project and will elaborate a campaign to motivate their co-students to save energy and carbon emissions. We expect that this will become a type of decision-making model for schools that wish to reduce their energy use.

SalFar aims to promote resource efficiency by (re)using degraded farmland and reducing fresh water consumption. Ten open field labs will be set up in each participating region to demonstrate innovative methods of farming on saline soil with natural adaptation processes in plants and crops. As an example, the project is dealing with three different kinds of pilots to test the salt tolerance of crops and the cultivating of plants that grow naturally in the Wadden Sea area.

One of the project beneficiaries, the Ökowerk Emden, has already started their pilots as “demonstrations,” i.e. trials without a strict scientific protocol. They set up two test fields with Salicornia and Cochlearia on flooded areas. Salicornia europaea plants were first raised in pots in the greenhouse and planted in open fields in August 2017. In October the area was covered with a five centimeter layer of salty mud. This test will show whether the natural regrowth of Salicornia by seed is feasible under these conditions and if the test field can be used as production unit in 2018.

The main aim of BIOCAS is to realize concrete Biomass Cascading Alliances (BCA’s) for a more sustainable conversion of biomass. The project connects 18 regional initiatives around technologies, processes, and businesses for the conversion of biomass streams. One of their pilots, led by the province of Fryslân, will replace the bicycle bridge over the Van Harinxma canal at Ritsumasyl in the Netherlands with one constructed using biobased material – the first of its kind in the country.’

The NSRP VB programme is at its mid-way point. What advice would you like to convey to potential applicants in Priority 2?

‘There is still money available in this priority, although we did see a large increase in applications in Call 4 – which probably means that the available amount will decrease once Call 5 concludes and decisions are made. Competition is high, so the sooner you start your application the better. Any forms of action in eco-innovation, regardless of sector, are up for discussion when it comes to increasing sustainability and reducing the environmental impact of production and services.’ 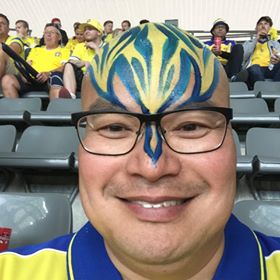 Jesper, who hails from Sweden, is not always working on Priority 2 project assessments and implementation. In his spare time he watches a lot of football; his favorite teams are Manchester United, Helsingborg (his home team), and the Swedish national team, of course. Jesper also enjoys skiing and hiking in the Austrian Alps. In addition, he has worked as an external expert for the Erasmus Plus Programme for the Swedish Council for Higher Education since 2005.