The North Sea Region Programme’s fourth thematic priority is green transport and mobility, which focuses on improving the flow of goods and people around the region and beyond.

How can the North Sea Region, an international trade hub for most of Europe, shift large volumes of freight away from long distance road haulage and improve the performance of the shipping industry and the development of more efficient passenger and freight transport hubs? These are the challenges Priority 4 addresses.

Sarah Holsen is the primary Priority 4 Project Advisor at the Joint Secretariat. Here are her thoughts about the priority and the projects she oversees.

What do you like about being a Priority 4 project advisor?

Being a commuter and having to deal with transport on a daily basis, I can see the relevance and need for the projects supported though the programmers’ Priority 4.  I like the fact that that it enables projects to find new solutions for, and improvements to, a wide range of different transport issues – from green passenger transport to the movement of freight away from the road and onto inland waterways. Another feature that appeals to me regarding Priority 4 projects is the highly enthusiastic and knowledgeable project managers that run the projects. They really know their stuff and are dedicated to their work.

How do you think the projects in Priority 4 affect the 60 million inhabitants of the North Sea Region?

Priority 4 does not support large scale infrastructure projects, such as the building of road and bridges, but we are able to work at a smaller scale, testing/trialing new or improving existing techniques within a transnational setting  and then apply the results in different regions. This approach makes a real difference to the lives of the citizens living in the programme area.  This is visible in the SHARE- North project, which includes activities for developing, implementing, promoting and assessing car sharing, bike sharing, ride sharing and other forms of shared mobility in urban and rural areas for the benefit of each towns/cities citizens.

One feature I particularly like about this project is that a number of its initiatives will be ‘mainstreamed’ and continue long after the life of the project, for example its mobility hubs.  As part of the project, partners Taxistop and Autodelen.net launched the idea of “mobipunten” (mobility hubs) in the Flanders Region to encourage citizens to use different types of sustainable and shared transport options. The inspiration came directly from the project partners from the City of Bremen and City of Bergen, who were already experimenting with this concept.

This mobility hub can have multiple functions but some are essential. It is necessary to have at least some car-sharing parking spots and bicycle parking. The hub should be near a public transport stop and easily accessible for everyone. It’s important to take into account mobility issues such as wheelchair-friendliness and the safety aspects.

I also think it is inspiring that SHARE-North is not just searching for technical solutions but also behavioral changes and using ‘living labs’ to integrate modern technology with activities to support changes in mobility behavior.

You have attended quite a few project kick-off meetings and promotional events since last autumn. What is your favorite part of participating in these meetings?

I really enjoy the buzz and excitement when partners and colleagues join together at the beginning of the project and agree how they will work together in practice. I also like that I have a role in promoting the priority.

I recently presented the programme and priority at the launch event for the SEEV4-City project last May in Amsterdam, which was included in the agenda and part of a larger international conference – the second ‘Vehicle to Grid’ conference. Around 250 people attended the conference from a number of sectors, including representatives from industry, government and education.

Our Dutch National Contact Point, Albin Hunia, and I also presented Priority 4 during an event in the Netherlands about smart and green mobility transport in February that attracted around 200 participants.

Another three projects (SURFLOGH, G-PaTRA and IWT) were approved in Priority 4 as part of Call 3 and I am also excited to see the first reports coming from these projects in May and June.

Please describe some of the interesting activities and pilots that Priority 4 projects are carrying out.

The HyTrEc 2 project is a unique project which is working with hydrogen fuel cell electric vehicles (FCEVs).  These vehicles have a larger range than electric battery vehicles. However, due to the high costs associated with FCEVs there is a need to make green hydrogen cheaper through more cost effective hydrogen production, storage and distribution. The project aims to improve the supply chain and training so that the NSR becomes a Centre of Excellence for hydrogen transport and a competitive environment is formed.

The SEEV4-City project has recently produced a useful document which provides an overview of ongoing/proposed Vehicle2Grid (V2G) pilot projects in Europe. Vehicle-to-grid (V2G) describes a system in which plug-in electric vehicles, such as electric cars (BEV), plug-in hybrids (PHEV) or hydrogen Fuel Cell Electric Vehicles (FCEV), communicate with the power grid to sell demand response services by either returning electricity to the grid or by throttling their charging rate. Overview document.

The document contains basic descriptions as well as the most notable characteristics of the projects such as location, partners, scale & type, the running time of the project and supply chain participation.

The NSRP VB programme is at its mid-way point. What advice would you like to convey to potential applicants in Priority 4?

We are still looking to complement this priority with further projects so there are plenty of opportunities and possibilities! I would advise new project developers to look at the already approved projects (and those from former programming periods) and make sure that what they would like to work on complements this work, adding value and building upon the work already undertaken.

It would also be great to encourage participation from SMEs that are interested in working together with the public sector on transport issues. Considering the latest policy developments and interesting angles ‘niches’ can also help to ensure the programme projects are future-focused. 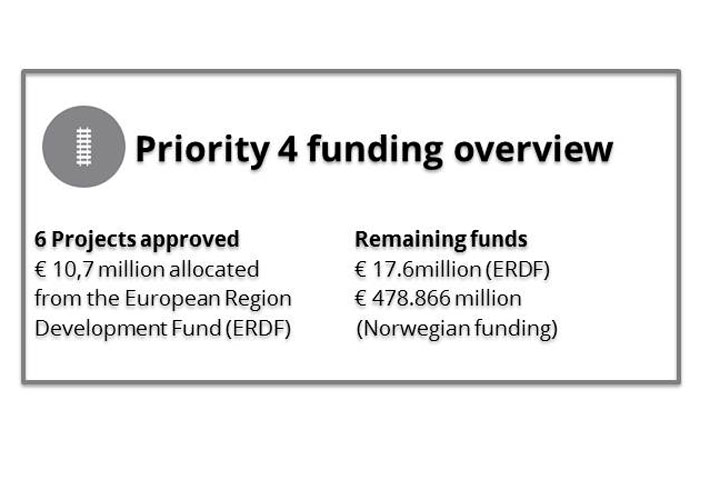 Sarah grew up mainly in northwestern Illinois, near the banks of the Mississippi River. After sojourns in Chicago, Japan, New York, and Ecuador, she met her German husband in San Diego in early 2002. They have since lived in London, Switzerland and – now – Denmark, where they hope to stay. She likes to run, travel, and spend time with her family, which includes two young daughters. Sarah is no stranger to blogging. Upon arrival in Denmark she set up a blog about life and events in Aalborg for newcomers, which she tries to maintain, if not as often as she would like!