Reflections from the Fehmarnbelt Days: Transnational cooperation is likely to benefit significantly from the construction of the world’s longest car and train tunnel.

The Fehrmanbelt Days conference was held in Malmö 28–29 May, focusing on the Fehmarbelt tunnel between Denmark and Germany and what it will imply for European connectivity and mobility. We joined the event to learn and discuss the opportunities this bring for the North Sea Region.

The Fehrman Strait ( Fehmarnbelt in German) is located between the German island Fehmarn and the Danish island Lolland. Linking the town Rødby with German Puttgarden, it will be the world’s  longest combined railway and motorway tunnel of a staggering 18 km, and is set to bring the  travel time from Malmö to Hamburg down to 3 hours.

The tunnel is expected to be in place by 2028. It will directly affect parts of Germany, Denmark and Sweden with a combined citizenship of 8,9 million people.

This is bound to reinforce the transnational cooperation between the three countries, e.g. the trade links between Copenhagen and Hamburg are already strong and will be further bolstered by enhanced transport options.

The Economist recently highlighted the combined impact of the projected Fehmarnbelt link and Brenner Base Tunnel on the overall cohesion of Europe:  Together with the existing Malmö-Copenhagen bridge, realising these projects will bring Northern and Southern Europe together, forming a new North-South transport line dubbed the ‘Malmö-Palermo Express’.

The tunnel connection is one of the largest infrastructure efforts in the European Union and is set to create incentives for further cooperation in the  North Sea Region, including important knowledge and growth fields such as life science, food, IT, logistics, wind energy, green technology and tourism. Other affected regions, such as the Baltic Sea Region, are likely to experience the same benefits.

The Fehrmanbelt tunnel will not only bring added value to northern Germany and southern Demark. It also brings important incentives for other parts of the region to further connect: A subway between Malmö and Copenhagen is on the agenda, with an estimated travel time of 23 minutes.  And a new  Interreg Kattegat-Öresund-Skagerrak project will  identify the strengths of a permanent link between Elsinore and Helsingborg, including aspects such as increased mobility and   shorter commutes. The results will be presented towards the end of 2020.

Kathrin Rath, Hamburg University of Applied Sciences, also acknowledges these major incentives and especially the signed letter of intent between Hamburg Metropolitan Region and Greater Copenhagen . In her role as coordinator for international research, she sees this as a declaration of an even closer cooperation between two leading metropoles.

‘A closer connection between Hamburg Metropolitan Region and Greater Copenhagen offers a lot of opportunities for applied research with higher education and research institutes in fields such as renewable energy, green mobility or digitalisation which are relevant for the future development of both regions,’ she says.

‘Solutions developed in research collaboration in this area will contribute to meeting challenges which are being perceived worldwide. Close cooperation with the business sector should complement the field of action as SMEs and industries are important partners to enhance applied research.’

The role of transnational cooperation

As several stakeholders pointed out, there is much to do to enhance transport options in the North Sea Regionand and new initiatives can build on the opportunities provided by the Fehmarnbelt link.  For example, transnational cooperation is needed to:

Do you have a green mobility idea? 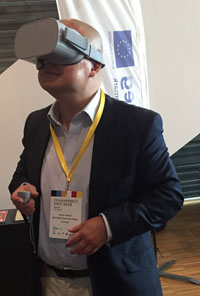 Jesper Jönsson is a seasoned Interreg North Sea Region Programme Project Advisor and takes a keen interest in the future of our region.

Here he is looking into tomorrow’s connections at the Fehmarn Belt Days!