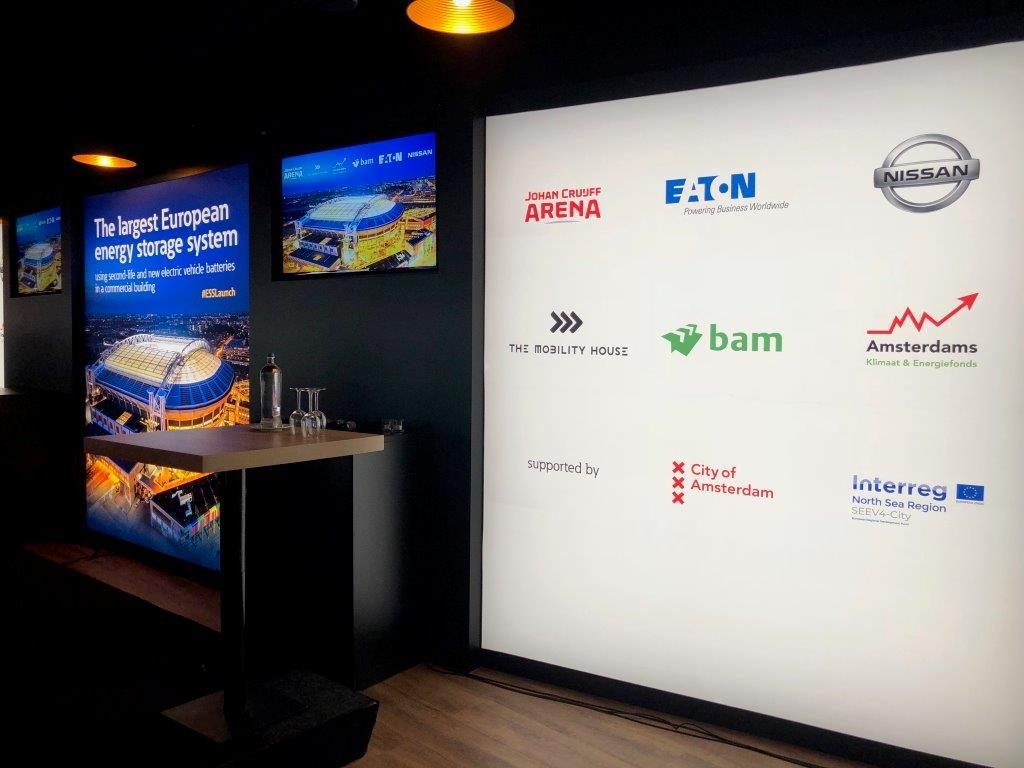 [UPDATE 07.08.18: According to SEEV4-City project administrator Janna Boonstra, since the launch of the energy storage system on 29 June, the World Economic Forum has posted to their blog about this initiative, which you can see here. Moreover, the Energy Manager of the International Olympic Comittee has asked to visit the ArenA to see if they can promote this solution for future Olympic Games.]

On 29 June, 2018 the largest energy storage system in Europe using second-life and new electric vehicle batteries in a commercial building was launched at Johan Cruijff ArenA in Amsterdam – and the Interreg North Sea Region Programme attended the event as a supporting organisation. The system is one of the initiatives in the North Sea Region Programme-funded SEEV4-City project that optimises the use of electric vehicles (EVs), renewable energy sources, and smart Information and Communication Technologies (ICT) to demonstrate how EVs can support the energy transition in cities in the North Sea region. I spoke on behalf of the programme and project during the presentation part of the event.

Johan Cruijff is an enormous structure that hosts concerts, sports competitions, dance events, and business conferences, welcoming over two million visitors each year. Naturally these activities are energy-intensive; peak consumption is 3MWh during a big event, such as an evening concert or football game. The new energy storage system provides a way to balance supply and demand of energy in the arena using second-life and new electric vehicle batteries (148, to be precise). This means, for example, that the energy produced by the 4,200 solar panels on the roof of the ArenA can be stored in the batteries and used optimally. The system also provides back-up power, reducing the use of diesel generators, and provides relief to the energy grid by flattening the peaks that occur during concerts. Moreover, at full capacity, the system can provide the arena with 3MW of power.

What does 3 megawatts actually mean, you might ask? According to the system’s creators, which include Nissan, Eaton, BAM, The Mobility House, and the ArenA, that amount of energy can:

The ArenA organised the launch event in order to start the energy storage system and take the arena further down its path toward greater sustainability. The ArenA leadership pride themselves, in fact, on their focus on innovation and initiatives to reduce the stadium’s environmental footprint. To this end, the energy storage system should contribute to a reduction of CO2 emissions by 7800 tons per year or 117,000 tons during the system’s lifetime (15 years).

In front of an audience of 200 people, representatives of the above organisations introduced their respective role in the system’s creation and answered such questions as how long a typical used car battery can be expected to contribute to the arena’s energy grid (answer: about 10 years). Then Udo Kock, Deputy Mayor of Amsterdam, pressed the red button to activate the system and the room erupted into cheers as they watched the yellow line signifying the power supply surge change from flat to dynamic. The arena then offered tours of the new facility, during which tour guides explained that there were even further innovations on the way, including charging stations for up to 200 e-vehicles in the ArenA’s parking garage that will be able to make additional contributions to the energy grid.

That next step of the system’s development will also be part of the SEEV4-City project, and Kock remarked upon this future iteration of the ESS in his remarks: ‘[The system brings power to the people] in two ways.  Power to the people, literally – the system brings power to this neighborhood, to the businesses. But it also gives power to the people in the sense that it is important for people to feel, to realise that they can contribute to this energy system in a very meaningful way. From a technological point of view it’s a great system and it’s very impressive. But also as a symbol for how – by working together you contribute to the energy system.’

This is the essence of working together, a cornerstone of the Interreg North Sea Region Programme. We are proud to be a part of this initiative.