TEN-T Days is the annual event for EU and member state transport ministers, officials, experts, and anyone else working on increasing transport connections within the European Union. Corridors, railways, maritime sector, urban nodes, hydrogen fuel, and infrastructure – these are just a few of the buzz words circling during the sessions and in the spaces of the exhibition hall at the event.

This year – from 25-27 April – TEN-T Days takes place in Ljubljana, Slovenia and Carsten Westerholt and I are attending as representatives of the North Sea Region Programme and the Interreg Thematic Objective 7 (‘Sustainable transport’) Network, organised by Interact. TEN-T refers to the Trans-European Transport Network, which is the EU policy covering all forms of transport infrastructure connecting Europeans.

This is the first time several Interreg programmes are jointly represented at TEN-T Days, thanks to Interact. Of course, the large-scale CEF (‘Connecting Europe Facility’) projects are represented in abundance, and the Innovation and Networks Executive Agency (INEA), which administers both CEF and Horizon 2020, is also present. But while it’s clear to me that each funding body has its place here – and in speaking with a number of attendees, I have gotten a really good picture of Interreg’s unique value – despite the small size of our projects’ budgets, relative to the bigger programmes.

CEF distributes tens of millions Euros to transport infrastructure projects in the EU; for example, the Northern Brenner Feeder Line, which will improve the Scandinavian-Mediterranean Corridor, and the Fehmarn Belt Tunnel, connecting northern Germany with southern Sealand in Denmark. Horizon 2020 funds research-focused projects on transport-related topics via targeted calls for proposals on very niche topics, e.g. ‘innovative test rig for the investigation of gust loads in transonic flow conditions’ or ‘hardening vehicle environmental protection systems against tampering.’ This allows cutting-edge research to happen in areas that are lacking in information and expertise.

What is special about Interreg in transport innovation?

So where does Interreg fit into the funding landscape, with our comparatively smaller funds? We spoke with some key stakeholders who nailed it down to 3 main points:

1. Room for experimentation and creativity

Interreg offers chances to innovate, opportunities for a bottom-up approach to problem-solving, and a lot of room within the specific objectives set by the programmes to design projects. Carolien Ruebens, who was the North Sea Region Programme’s Flemish National Contact Point from 2008 to 2016 and is now a senior project officer for the European Cyclists’ Federation, explained to me that ‘Interreg gives organisations the opportunity to try things out – to operate via a bottom-up approach in developing their idea. This is in contrast to Horizon, which works much more from a top-down perspective, starting with the very specific topics they seek to fund. Thus, there is more room in an Interreg project to experiment and be creative, which can be really helpful when trying to solve problems at the small-scale level.’

A focus on cooperation is also at the forefront of Interreg projects. Linda Talve, who works for Interact in Turku, Finland, gave me an example to illustrate this. ‘On Wednesday, a man who was interested in learning more about Interreg stopped by our stand. He had worked on a transport-related project that straddled two borders and included a huge investment in highway infrastructure. On one side of the border the procurement process was clear and the project managers succeeded in tendering the work there. However, the project administrators were not familiar with the procurement process on the other side and so the project stalled and ultimately was discontinued.

I explained to him that Interreg offers the knowledge and connections that exist on both sides of a border or in all corners of a larger region, which partners can put to work from day one and use to move forward rapidly with their project’s implementation. Cooperation – whether transnational or cross-border – is an essential ingredient of Interreg projects.’

3. Give and take in diverse partnerships

Prospects for building strong partnerships that can work together and really learn from each other as they progress is also a strength of Interreg. Johan Scholte, who works for the Province of Drenthe and is the beneficiary lead for Drenthe’s participation in the NSRP HyTrEc2 project, is also responsible for his organisation’s activities in a CEF-funded project TSO2020. ‘What I like about the Interreg programme is that the partnership I’m a part of is not only a tool for achieving our goals – it is also something we benefit from. When we meet to discuss the successes and challenges we’re experiencing as the project advances, for example, there is a lot of back and forth dialogue, and that helps us all progress. We learn from each other – and that adds tremendous value for the individual partners.

Working with SME’s within the project also helps us to get innovation started – innovation that is needed to realize CEF projects. For instance, within the HyTrEc2 project we, as a province, will be testing four hydrogen vehicles. A fastfill hydrogen refueling station (HRS) would be too expensive for only four cars to use. So a local SME, Resato International, is designing and producing a mobile HRS, which they call a Fleet Owner Station. The investment costs for this HRS are about EUR 150.000. And because it is a mobile station you can easily deploy it somewhere else once you have enough hydrogen vehicles to justify the demand. In this way you can roll out the hydrogen infrastructure easily and cost-effectively. And all of this thanks to the help of the Interreg NSR Programme!’

So why choose Interreg? The bottom line

Hugo Niesing, who is representing the SEEV4-City project at the TEN-T Days, has been involved in projects in both Interreg and Horizon. He is currently looking into opportunities for a new project, and I asked him why he might choose Interreg again. ‘Europe’s cities struggle to reach air quality and CO2 emission objectives and implement clean mobility and renewable energy provide solutions. Actually, they can only achieve these aim when their efforts are well integrated! The integration of electric mobility and renewables, for example, requires strong, scalable examples, business cases that can be replicated, and policy support. The Interreg programme provides the best conditions to experiment, develop and implement solutions by focussing on innovative technology, organisation, logistics, awareness and behaviour.

Working on the uptake by policy and large roll-out by projects Interreg is paving the way for TEN-T and TEN-E projects in Europe. The complementarity and interdependency between funding programmes is good and very important. However, in my opinion, Interreg allows more space for failures and learning (through errors) about how innovation is absorbed or rejected though testing and joint developing on the why and how.’ 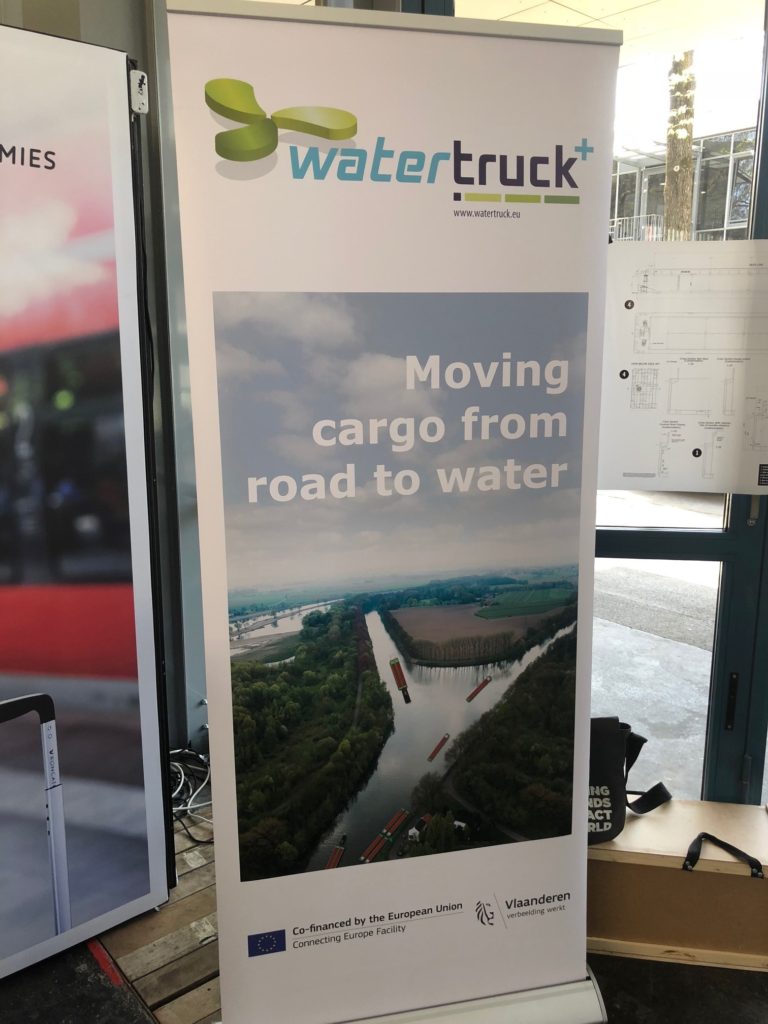 Ultimately, Interreg projects often lead to larger endeavors, pilots that multiply across borders, countries, and regions, and practices that others adopt and adapt. Take, for example, Watertruck+, which is a EUR23 million CEF project now but stemmed from the much smaller scale Interreg Northwest Europe project called Watertruck, which was implemented during the IVB period (2007-2013). SHARE-North, a current NSRP project, has taken the successful Mobipunkt concept started in Bremen and helped establish it in Flanders and Bergen. In other words, the value of Interreg speaks for itself – but it also has a multiplier effect. Many outcomes of Interreg projects also contribute directly to improvements and upscale initiatives that will cement the legacy of those projects for decades to come.

The North Sea Region Programme will hold an Idea Generation Camp on 13 June in Fredrikstad, Norway. If you are interested in pitching an idea, finding partners for a project proposal, or just want to find out more about applying to our programme, please join us! More information here.